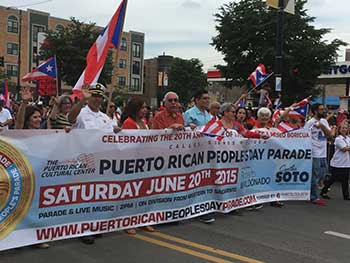 Saturday's heat and mugginess did not keep Puerto Ricans from standing in line to show their support. As early as 11:30 AM, despite the parade starting at 2 PM, residents and other Puerto Ricans were setting out their lawn chairs and coolers to get front row seating for the parade. By the time the parade would start at 2:10, from storefront to gate Puerto Ricans, Latinos and community residents stood watching floats from community organizations like the Juan Antonio Corretjer Puerto Rican Cultural Center, AfriCaribe and ASPIRA to political contingents like 1st ward alderman, Joe Moreno, 26th ward Alderman, Roberto Maldonado, and the National Boricua Human Rights Network- Chicago chapter. Toddlers walked hand in hand with their parents  or, from their strollers perched on floats, watched the crowd cheer them on. When a Pedro Albizu Campos High School alum stood on a float in the middle of California and Division Street's intersection to sing "Despierta Boricua," the crowd either stood silent or joined in, many with fists raised in the air. 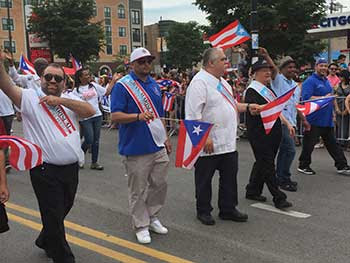 The Parade this year was dedicated to the 20th anniversary of the erection of the amazing Paseo Boricua Flags- the world's largest monuments the Puerto Rican flags- as well as the big and minor Baseball Leagues of Humboldt Park and Cocineros Unidos (United Cooks) of Humboldt Park.

Puerto Ricans in Humboldt Park continue to rally to demonstrate the significance of Humboldt Park to their sense of culture, history and politics. Congested gatherings like the 37th People's Parade on Division show us that no matter where we go, where or how we live, Humboldt Park and Paseo Boricua are still Boricuas' pedacito de patria away from la isla.

1995. First time I participated in Chicago's downtown Puerto Rican Parade, pushing my cousin's youngest daughter in a stroller. Also the year Chicago placed two Puerto Rican flags of steel in the ground of the mile-strip between Western and California known now as Paseo Boricua. Talking about 1995 frames the parade that took place on the Saturday before 2015's Father's Day because of what has changed and what, despite those changes remain the same.

Puerto Rican pride was not the only sentiment waving through the air, though, as the sight of rainbow flags demonstrate. Whether on LGBT-centered initiatives' floats like El Rescate and Vida SIDA or in the crowd, queer, trans and LGBT Puerto Ricans were waving both flags during the parade. Youth spearheaded that visibility, paving the way for the growth of Chicago's Puerto Rican community to serve the ever-increasing diversity of their community.