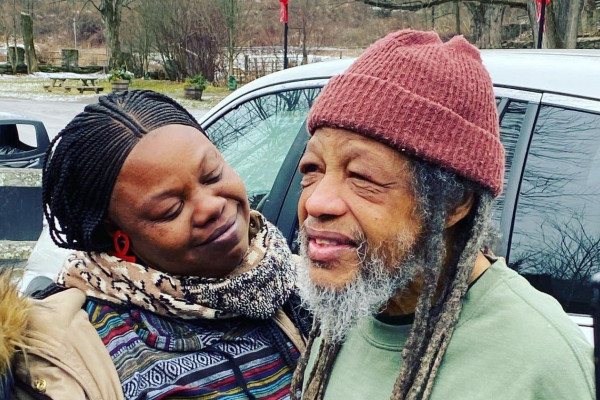 On Aug. 8, 1978, MOVE member Delbert Africa climbed out of his basement and raised his arms to the sky in surrender. The image soon became one of the most iconic photographs in Philadelphia history, as seconds later, police officers were caught on film beating Africa with a helmet and rifle, then dragging him by his dreadlocks. The incident was part of the first armed battle between the Philadelphia Police Department and MOVE, a radical liberation group living at the time in a Powelton Village commune.

On Saturday morning, Africa, 73, was captured outstretching his arms once again, this time as a symbol of freedom. He was paroled from prison after more than four decades of incarceration.

Brad Thomson, part of Africa’s legal team, broke the news on Twitter. “Delbert Africa of the #MOVE9 is free!” the Chicago attorney wrote in a tweet. Thomson shared side-by-side images of Africa holding his Christlike stance in 1978 and 42 years later, after his release from Pennsylvania’s state correctional institution Dallas.

Africa was one of nine MOVE members sent to prison on third-degree murder charges for the death of Philadelphia Police Officer James Ramp, shot during the 1978 standoff between MOVE and Mayor Frank Rizzo’s Police Department. The episode culminated a 15-month-long clash between city authorities and MOVE members, primarily involving health‐code and weapons violations.

MOVE was created in 1972 by West Philadelphia native Vincent Lopez Leaphart, who later called himself “John Africa” and preached an ideology centered on black revolutionary ideas and back-to-nature philosophies. The dozens of members considered MOVE their religion, adopting antitechnology and antigovernment beliefs, while taking on issues ranging from police brutality to animal rights. ...

“I’m so happy to have my brother home," Janine Africa said by phone Saturday evening after Delbert Africa’s return to Philadelphia. "It’s something that they told us would never happen, but I never lost faith that this day would come. The power of righteousness will never betray you.”

Delbert Africa is the second to last of the nine incarcerated MOVE members to be released or to have died while in prison. Janine was released in May. Only Chuck Africa remains locked up.

The August 8, 1978 standoff was just the start of the contentious relationship that was brewing between MOVE and the city. By 1980, the group had relocated to the 6200 block of Osage Avenue. Neighbors began to complain to the city about trash, the loudspeaker rants, and concerns about child abuse and neglect in MOVE’s house. After many contempt-of-court violations, Mayor Wilson Goode and Police Commissioner Gregore J. Sambor called MOVE a terrorist organization.

On May 13, 1985, the city flew a helicopter over the group’s Osage Avenue home and dropped the bomb that left 11 people dead, including John Africa and Delbert Africa’s 13-year-old daughter. The entire neighborhood was in ruins, with 61 homes destroyed. City officials were found to have acted recklessly, but no charges were filed.

In an interview with the Guardian, Delbert Africa explained how he responded to the news of his daughter’s death. “I just cried. I wanted to strike out. I wanted to wreak as much havoc as I could until they put me down. That anger, it brought such a feeling of helplessness. Like, dang! What to do now? Dark times.”

On Tuesday, Delbert Africa will speak out for the first time since leaving prison. A news conference is scheduled for 2 p.m. at Kingsessing Library (1201 S. 51st St.). Delbert’s other daughter, Yvonne M. Orr, has set up a GoFundMe campaign to raise funds to help him reacclimate and find housing.