Billboard on I-80 between Lincoln and Omaha, Nebraska.

Gov. Ricketts sees this every day on his way to and from work!

Please phone the Nebraska Pardons Board as many times as you and your friends, comrades, associates, and family can. We have provided a script below. Please give your name and the state that you live in, and if you can, leave a phone number.

Nebraska Board of Pardons

Please share this campaign, write a letter to the Pardons Board and sign the online petition: http://chng.it/vctskKv49k

Ed would be very grateful. We would also appreciate if you could send us a copy of your letter to: freedomfored@gmail.com

I am calling to demand and pray for the Compassionate Release/Commutation of Sentence and rapid release of Mr. Edward Poindexter #27767. Ed Poindexter is one of the eldest prisoners in the state penitentiary and as such, along with other elderly prisoners in Nebraska is at great risk of serious illness or death should he contract the coronavirus. We are focusing on Ed, but also pray for the release of other elderly prisoners.

Therefore, I request you schedule a special Pardons Board hearing as soon as possible to consider ALL the commutation applications at once, particularly for prisoners over the age of 60.

Nebraska is not alone in facing this crisis, and if you act now with compassion to protect the lives of elders in prison, you will be in step with several other states who have taken this important step toward humanity and toward the application of the basic principle of human rights. Please release Ed Poindexter and his peers immediately! Thank you for having compassion for elderly prisoners who are at high risk of dying from covid19, and for recognizing that holding them during this worsening pandemic is tantamount to inflicting a sentence of death or debilitation.”

Ed Poindexter finally filed his application for commutation of sentence on August 17, 2020.

At the August Pardons Board meeting, Dr. Topolski, a new supporter, asked the governor to expedite Ed's application because of the risk of covid19.

Thank you so much for your decades of support for Ed, and for Mondo we Langa!

In April of 1971, Edward Poindexter and Mondo we Langa, formerly David Rice, were sentenced to life in prison for the death of an Omaha police officer—a crime they did not commit. The two were targeted by law enforcement and wrongfully convicted due to their affiliation with the Black Panther Party, a civil rights and anti-fascist political group.

Nearly 50 years later, Ed is still in prison and maintains his innocence. He has earned several college degrees, taught anti-violence classes to youth, authored screenplays, and more. His last chance for freedom is to receive a commutation of sentence from the Nebraska Board of Pardons. At age 75, he is at high risk for COVID related health complications. He must receive an immediate and expedited commutation hearing from the Board.

I am writing in regards to Edward Poindexter, #27767, who has served nearly 50 years in prison with exemplary behavior and many accomplishments. He is 75 years old and at high risk for COVID-19 related medical complications, which have been amplified by the increased COVID transmission rate among prisoners. I am therefore requesting that the Board expedite Ed’s application, schedule his hearing for the October 2020 Board meeting, and commute his sentence to length of time served.

You can read more about Ed here: 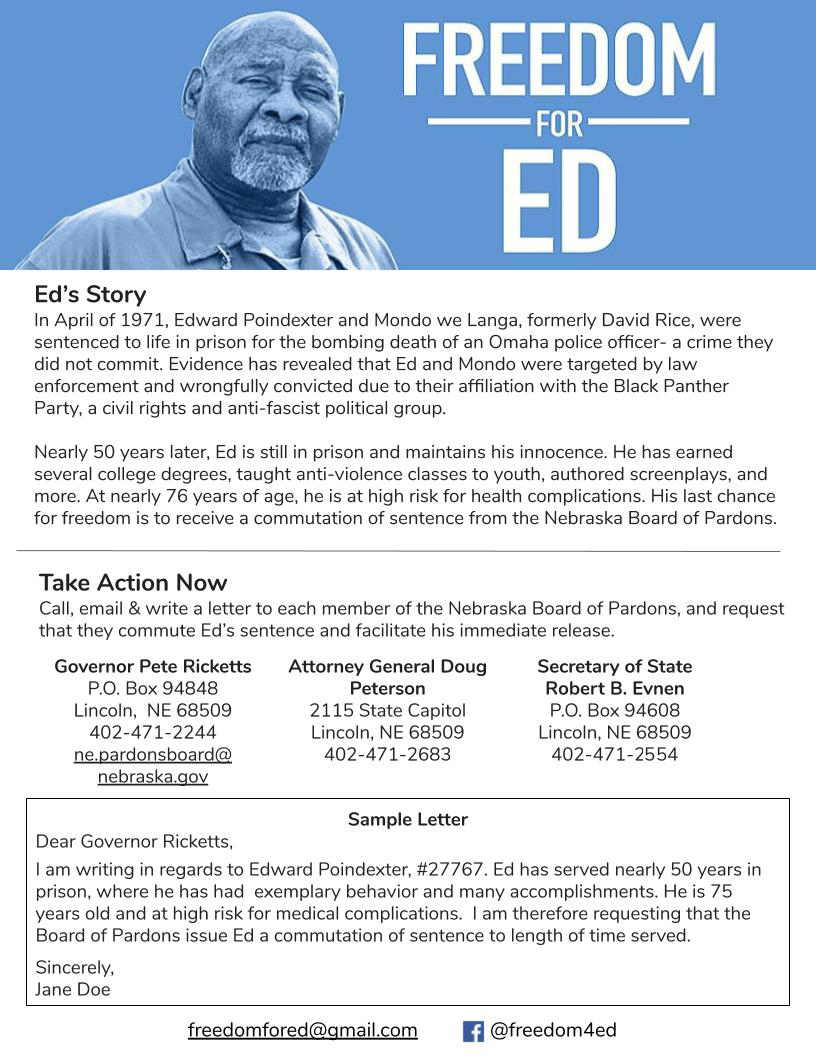