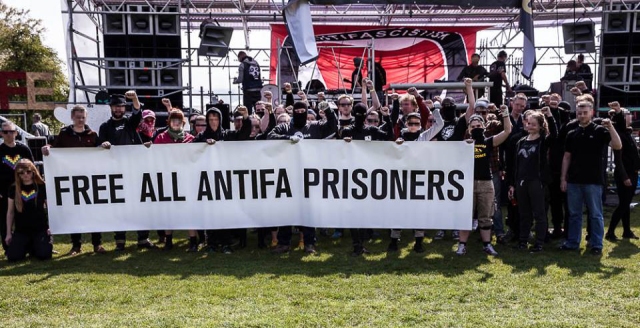 Antifascists fight against those who—in the government or in the streets—dream of imposing their fascist and other Far Right nationalist nightmares on the rest of us. Throughout the world, Islamophobic, anti-Semitic, anti-immigrant, and racist bigotries are on the rise. Antifas are on the frontline in confronting these reactionary politics, and we will not forget our comrades imprisoned in the course of this struggle.

The July 25 International Day of Solidarity with Antifascist Prisoners originated in 2014 as a Day of Solidarity with Jock Palfreeman, an Australian who is imprisoned in Bulgaria for defending two Romani men from an attack by fascist football hooligans. Groups around the world took action: holding demonstrations, benefits supporting theBulgarian Prisoners Association, writing to Jock, and talking about the plight of the Romani and Sinti people in general.

In 2015 we would like to expand this day of solidarity to all antifascist prisoners around the world. We encourage groups to take the day to plan an event of their choice—whether it is a letter writing, demonstration, benefit, or other action—and to focus on the prisoners and related issues that are of most importance to them locally.

Below is a list of global antifascist prisoners; if there is an antifa prisoner who is missing, please e-mail us with his or her details and the language(s) they can read.

Until All Are Free!