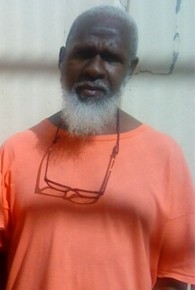 U.S. Prisoner
Join the campaign for the International Tribunal on United States violations of human rights in November 2021
Join the Campaign