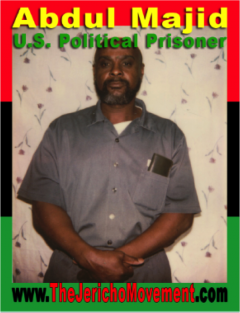 “While we have had setbacks as a result of subterfuge and subversion from both within and without, we must intensify our current efforts to mobilize the masses for survival and liberation. I believe the only real guarantee we prisoners of war and political prisoners have of staying alive and surviving these prisoners of war camps is by keeping our conditions and status before the public both domestically and internationally. Insha ALLAH (ALLAH willing) we will get relief (freedom) denied us the last 400 years in Babylon

My name is Abdullah Majid, formerly Anthony LaBorde. I was born on June 25, 1949 in Flushing, New York. I am the father of four children, and the fourth child of five boys. My two elder brothers are deceased, as is my father. My mother lives in Jamaica, New York.

My political awareness began in earnest when I was 15 years old, around the time of the murder of El Hajj Abdul Malik Shabazz (Malcolm X). I can recall vividly in 1962–63 many of the news accounts of the struggle in Africa, particularly the Congo; the murder of Patrice Lumumba and several other patriots of the national liberation struggle in Southern Africa, and the civil rights (national liberation) struggle in amerikka by people of African descent. I realized, despite geographical differences, the stunning similarities between the oppressed as well as the oppressors both here and there.

As a result of this awareness, I began working with other brothers in Jamaica, Queens, starting with the Grass Roots Advisory Council. We attempted to get funding from the poverty programs in the community with no success. After about two years of this, we realized the limitations placed upon us struggling in this manner. By this time I became involved with the Black Panther Party and the Republic of New Africa. I found both of these organizations to be much more relevant and effective with respect to the issues affecting our people. I worked in various programs such as free breakfasts for children, free clothing, liberation schools for youth, and adult political education classes, all with positive results. The Party and the RNA were also involved in important community issues, i.e., community control of the murderous police department and community control of the schools, as well as the struggle around health care in our communities. I was also in a leadership position which required more and more time working with new Party members. From 1968 to 1971, I was a full-time Party member.

Needless to say, I became a target of this government’s “law enforcement establishment” (COINTELPRO) for my political work, along with thousands of other activists. Recently, some of the underhanded operations to disrupt, frame, and murder many of the imprisoned freedom fighters are coming to light.

In the spring of 1981, much to my surprise, I became a primary suspect in the shooting death of one cop and the wounding of another. Being familiar with how the police react to attacks on them, I decided not to wait for them to come to me. This led to a nine-month search-and-destroy campaign by the government both nationally and internationally. While being hunted by these gestapo I attempted to maintain a normal existence with aid from family and friends.

I was finally arrested in January 1982 by the Philadelphia gestapo after a physical confrontation with them during which I sustained injuries to my head. I was transported back to New York City to stand trial with Bashir Hameed (James York), who had been apprehended in Sumpter, South Carolina, for murder and attempted murder of the same two cops.

After five years and three trials, the state was finally able to engineer a trumped up conviction with flimsy and circumstantial evidence. I was sentenced to 331/3 years to life total on the two counts. Some five years after the murder conviction, our case was finally heard by the appellate division, second department (N.Y.), November 19, 1991. True to form of not dealing with the law where political prisoners are concerned, the court pandered to the desires of the “law enforcement” community. The court wasted no time in dispensing “justice” by issuing what has to be the fastest decision in its history (December 19, 1991). Just one month later, the court affirmed this conviction. This was no mean feat for the court, considering the fact that it has the largest caseload of any state appellate court in the nation and is backlogged by over one calendar year with cases waiting either to be heard or for rulings on cases already heard, according to court personnel. After a motion for re-argument, the appellate court remitted the case for hearing on our Batson claim (Batson vs. Kentucky), wherein we raised the issue of racial discrimination during jury selection. After a hearing, the appellate court reinstated its original decision. Our last resort in state court was denied in June 1996 by the New York court of appeals. All appeals (state and federal) have been exhausted for Bashir and me. We are exploring the possibility of a collateral attack on the sentence. Bashir Hameed returned to Allah on August 30, 2008 at Comstock Prison as a result of medical (murder) neglect by agents of the state.

The government has been very uncooperative about turning over requested documents being sought by me under the Freedom of Information Act. During the three trials, there were deliberate acts by law enforcement agencies to hide certain evidence helpful to the defense. Attorneys are still in the process of trying to make law enforcement agencies turn over all evidence in this case. In spite of my long incarceration, prison has not broken my spirit of struggle. I have been harassed, seriously assaulted twice, denied proper medical treatment, then placed in the special housing unit (SHU) as a result of being assaulted. I have also been refused certain programs offered to the general population because of my political background, supposedly due to the “influence” I am alleged to have with other prisoners. I have been repeatedly transferred hundreds of miles around the state away from my family, friends and supporters.

However, the government has not been totally successful in its attempts to criminalize our struggle for self-determination. The masses do understand the courageous positions of those who are jailed as a result of their political acts. It will be just a matter of time before that understanding by the masses turns into action. While we have had setbacks as a result of subterfuge and subversion from both within and without, we must intensify our current efforts to mobilize the masses for survival and liberation. I believe the only real guarantee we prisoners of war and political prisoners have of staying alive and surviving these prisoner-of-war camps is by keeping our conditions and status before the public both domestically and internationally.

Insha ALLAH (ALLAH willing) we will get the relief (freedom) denied us for the last four hundred years in Babylon.