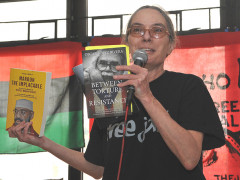 I first became involved with political prisoner work in 1973. After the coup in Chile, I worked with The Office for Political Prisoners and Human Rights in Chile (OPPRICH) and helped to save the lives of many of these political prisoners. I was also involved in the movement against the war in Vietnam and the movement against the U.S. wars in Central America. I worked with Comité El Salvador in the 1980s in support of the FMLN and helped produce our monthly newspaper, El Salvador's Link. I also lived and worked in Nicaragua from 1984 until the early 1990s.

After returning to the U.S., I once again became involved in political prisoner work after meeting the late great Safiya Bukhari, one of the co-founders of The Jericho Movement. When I met her, Safiya was leading the Free Mumia Abu-Jamal Coalition, of which I was a member. Working with Safiya was an honor and a privilege, and so of course I joined with her and others and have been with Jericho since its inception, working hard to free U.S. political prisoners and POWs.