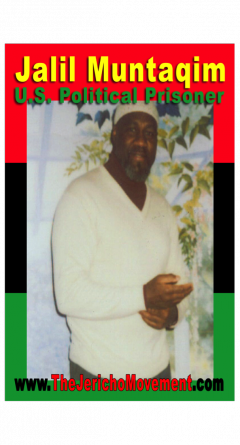 “Given the fact, neither the capitalist economic system or electoral politics benefits the majority of Americans, but rather serves  the interest of corporate entities that according to law are persons, as Americans are considered commerce property, there is no wonder there is a need for a new American Revolution!”

Jalil was 19 years old when he was arrested. He is a former member of the Black Panther Party and the Black Liberation Army. For the past 45 years, Jalil has been a political prisoner, and one of the New York Three (NY3), in retaliation for his activism in the 1960s and early 1970s.