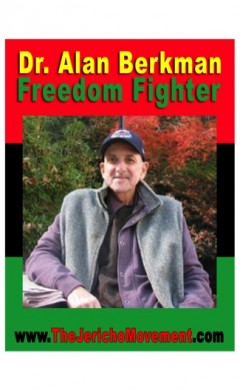 Berkman was a longtime advocate for social justice in health care, sneaking behind government barricades to provide medical care to Native American freedom fighters at Wounded Knee, South Dakota, and treating prisoners injured during the Attica Uprising in New York. When he was arrested for removing a bullet from an activist’s leg, Berkman refused to testify before a federal grand jury and spent years in prison.

While incarcerated, Berkman advocated for improved medical treatment for his fellow inmates; after his release, he continued to speak out about poor conditions in federal correctional facilities. He then went on to become medical director of Highbridge Woodycrest Center in the Bronx, New York, one of the first skilled nursing facilities for people living with HIV. He later joined the faculty of Columbia University Mailman School of Public Health in New York City, where he dedicated himself to improving treatment access for HIV-positive people around the globe. With that goal in mind, he helped found Health GAP in 1999.

In a statement, Health GAP steering committee member and AIDS activist Jamila Headley described Berkman’s life as “so well lived, firmly rooted in a genuine commitment to social justice that led him beyond concern to action, which he sustained for his entire life. His death is such a loss, but he has truly given all of us so much—his time, his passion, his friendship and advice, his ideas, his investment in making the expansion of treatment access possible.”

See Alan speaking about political prisoners in the U.S. at the 1998 Jericho Movement march.

Alan's commitment to The Hippocratic Oath caused him problems early on. The sections:

• To practice and prescribe to the best of my ability for the good of my patients, and to try to avoid harming them, and,

• To keep the good of the patient as the highest priority.

compelled him to treat wounded fugitives that would surely face ill treatment if reported and treated by legal authorities. This article in the 1985 New York Times highlights this:

A New York City physician, on the run for two years since his indictment for treating suspects in the Brink's robbery and killings in Rockland County, has been arrested, the Federal Bureau of Investigation announced yesterday. The doctor, Alan Berkman, who is 39 years old, was apprehended Thursday night.

Alan was himself a political prisoner. Here is is with members of his case, the Resistance Conspiracy. The Resistance Conspiracy case (1988-1990) was a Federal Judicial trial in the United States, in which six people were charged with the 1983 U.S. Senate building bombing to protest the illegal and violent U.S. invasion, occupation and removal of the elected government of Grenada. The Resistance Conspiracy 6 also engaged in related property destruction of military supporters for the apartheid government in South Africa, among others. In all his actions Alan was extremely careful to (1) engage solely in property damage and (2) never harmed so much as a peice of hair of any person, and (3) always kept the most oppressed in the forefront of an action as to the course of activity.

About 200 people crowded into a Manhattan auditorium to witness Hoos accept his award. Berkman was missing in action—he was in the hospital about to undergo a bone marrow transplant.

“As many of you know, Alan has a tendency not to show up when he’s expected–I guess tonight is one of those times,” his wife, Barbara Zeller, MD, told the crowd jokingly. This was Berkman’s seventh treatment for life-threatening cancer.

He passed away a few days later on June 5.

Dàzon Dixon Diallo, founder of Sister Love Inc.—a sexual and reproductive health rights organization that focuses on HIV and women of color—flew in from Atlanta to join Air America’s Ron Kuby to emcee the event. The two opened the ceremony by talking about Health GAP’s history and the impact the organization and the night’s honorees have had on pushing the concept that all people living with HIV deserve the right to receive ARV treatment regardless of the cost.

“By their tireless efforts, these two men have single-handedly saved the lives of millions around the globe,” Kuby said.

In 1998, at the International AIDS Conference in Geneva, Hoos, Berkman and other activists witnessed a serious disconnect in facing HIV on the global stage. “Those of us from richer countries were focusing on the further good news about HIV treatment, and those from poorer countries were attending sessions on palliative and home-based care approaches to caring for the dying,” recalled Hoos, who is also HIV positive. “Alan invited me to join a small group of people to try to answer the question: ‘How could U.S.-based activists make a difference?’”

A year later, Health GAP was formed—three years before the Global Fund was founded and four years before President George W. Bush proposed the President’s Emergency Plan for AIDS Relief (PEPFAR). Hoos added: “We started to learn a lot very quickly about drug manufactures, drug pricing, patent protection and intellectual property rights. And it became obvious that the high price of HIV drugs was not necessary.”

As he ended his acceptance speech, Hoos thanked other activists who helped. “I want to thank many people who are here who were more able than I was,” he said. “[For those who put] their bodies on the line and spilled fake blood in front of drug company shareholder meetings, while Alan and I and some others would wear sport coats and go to more decorous meetings.”

When Berkman’s award was given, Zeller spoke of how proud her husband is of Health GAP’s accomplishments during the past 10 years. She also shared with the crowd the inspiration that sparked Berkman’s passion for fighting injustice—hearing Black Panther leader Stokely Carmichael speak in the ’60s. She said that Berkman asked himself, “‘And if there was a more complex reality going on—if not two different realities—which one was I going to identify with? Was I going to continue to just follow this track of a young, white man who’s interested in being a doctor and sort of go along that way and hopefully be a nice doctor? Or was I going to change my life to take into account that there was a profound social injustice?’”

As the evening ended, Dixon Diallo re-emphasized the impact that Berkman and Hoos have made, but reminded the crowd that more needs to be done to fight health injustice. “These two great men laid the foundation for a movement. Many of you in the room have built upon it. But the work is not done.”