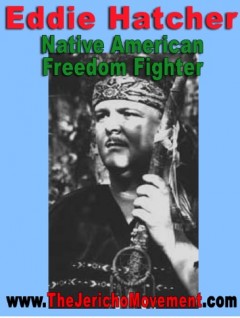 Hatcher was imprisoned a number of times and died in prison in 2009.

For nine days, he had lived in fear. He couldn't sleep. He thought he was being followed. He did not know where to turn.

Hatcher knew things - at least, he thought he did - that he was convinced the powers that be in Robeson County wanted to keep hidden. The things he knew, he told his friends, could get a man killed.

He could be blown away some dark night on a lonely road, just like that. Like that Cummings boy who got shot in the head. He would be just another dead Indian.

According to his friends, these were the thoughts that had tortured him for days leading up to Monday morning, when Hatcher, 30, and Timothy Jacobs, 19, two Tuscarora Indians, went to the offices of the Robesonian, the local daily newspaper.

Armed with sawed-off shotguns, they chained the doors and took 19 people hostage, releasing the last captives 10 hours later - only after securing a promise from the governor that allegations of corruption and racial injustice in the county would be investigated.

It wasn't the first time Indians here had asked for an investigation. Allegations have been made for years that county officials are involved with

drug smuggling and have ridden roughshod over the rights - and, some would say, the lives - of Robeson County Indians and blacks, who together make up 63 percent of the population.

Never before, though, have the complaints led to what the Indians or blacks regarded as a satisfactory investigation. That is why, in the clapboard shacks and in many of the offices and meeting rooms of this sprawling backwoods county, Hatcher and Jacobs now are being called heroes.

"There is a lot of popular support for what they have done," said the Rev. Mac Legerton, director of the Robeson County Coalition of Concerned Citizens. "It falls right into the historical traditions of the county. Citizens who have suffered abuse have tended to violence as a means of resistance."

One example of that occurred in 1958, when a huge band of Lumbee Indians encircled a group of Ku Klux Klansmen who had come to their community to hold a cross-burning. The Indians chased the Klansmen away, and rarely have they had problems with the Klan since.

And then there was Henry Berry Lowry, a legendary Indian leader who led a guerrilla band from the North Carolina swamps in attacks on whites in the mid- 1800s, after Indians in the state were stripped of their citizenship rights and some were forced into slavery.

Covering 949 square miles, Robeson is the largest county in the state, a farflung collection of backwater towns separated by wooded swamps and wide, flat expanses of farmland.

"They call it the state of Robeson. It is a state within a state," said the Rev. Jimmy Hunt, an Indian leader of a legal rights group. He is not talking merely of the county's size.

This is how Mr. Legerton puts it: "The social, economic and political situation here is similar to the Third World. . . .

"The social, economic and political conditions breed powerlessness, they breed despair and they breed violence. The takeover was a direct result of that."

Cloyd Hall, a Justice Department conciliation specialist visiting the county last week, said it is a community in crisis.

"It is in crisis because there is a perception of disparate treatment against minorities, injustice in social and political arenas and real concern by the public at large. The tension level of Robeson County is volatile," he said.

The county's population is almost evenly divided among blacks, whites and Lumbee Indians. Indeed, Robeson County is home to the largest Native American community east of the Mississippi River. It is a relatively prosperous Indian community, with the country's first Indian-owned bank and Indian university, but it also is a land of debilitating poverty.

The county, with 101,000 people, has a no-nonsense prosecutor, Joe Freeman Britt, and a law-and-order sheriff, Hubert Stone. But it also has one of the state's highest murder rates and a number of unsolved crimes involving minorities.

There was the rape and murder in 1985 of Joyce H. Sinclair, a black woman whose 4-year-old daughter said a "white man dressed in white clothes" had come to the house late at night and led her mother away in a bathrobe. Critics of the sheriff's department say it has not worked hard enough to solve the crime.

"The case is still open," Sheriff Stone said. "We're still interviewing people when information comes up." The FBI had determined that the killing was not racially motivated, he said.

Almost exactly a year later came the incident that galvanized Indians, blacks and many whites in the county, and caused them to bridge their racial and social differences to hold a series of protests. It was the killing in November 1986 of an unarmed Indian man, a small-time drug dealer, by a sheriff's deputy.

"That was the straw that broke the camel's back," said Ray Littleturtle, an Indian activist.

The man, Jimmy Earl Cummings, was shot in the head on a back road after having been stopped by the deputy, Kevin Stone, the sheriff's 19-year-old son.

During a coroner's inquest, Kevin Stone testified that Cummings, after trying to run away, had begun to swing a plastic bucket at him. The inquest jurors found that the shooting of Cummings was "an accident or in self- defense" - a ruling that brought protests both because of its inconclusiveness and because Cummings' family said they were not notified of the hearing in time to hire an attorney.

What is more, Cummings' family members say he had been afraid for his life for some time before the shooting. He had been dealing drugs stolen from the evidence locker at the sheriff's department, said his sister, Quisse Strickland, in an interview last week.

After a falling-out with sheriff's deputies who had supplied him with drugs through an intermediary, "my brother told me that Kevin Stone was going to kill him," Strickland said. Sheriff Stone said that the shooting was thoroughly investigated and that his son was cleared. He calls all of the allegations against his department "falsehoods."

An investigation in 1986 by the state Bureau of Investigations and the FBI into an alleged conspiracy to sell 500 grams of cocaine stolen from the evidence locker resulted in the indictment of one deputy, Mitchell Stevens. During his trial, he testified that he had been told by a drug dealer that the sheriff was receiving payoffs. A jury acquitted him.

At the time, Kevin Stone was one of two people with keys to the locker.

The sheriff said he knows of no wrongdoing within his department. He said he welcomes Gov. Jim Martin's appointment of a three-member task force to investigate Hatcher's allegations that the department was involved in drug trafficking and mistreatment of minorities.

"I have an open-door policy to any agency that wants to investigate," said Stone, a 31-year veteran of the department who has been sheriff for nine years. "If I've got a bad apple, I'm the first one that wants to know about it."

In a Jan. 23 letter that Sheriff Stone describes as an attempt at extortion, Hatcher told him of one alleged bad apple - the sheriff's son, Kevin.

In the letter, Hatcher claimed to have proof that Kevin Stone, a deputy in the narcotics division, was involved in cocaine trafficking.

Rural Robeson County is known as "cocaine alley" because of the easy availability of drugs here and its location on Interstate 95, the main cocaine shipping lane between Florida and New York.

The letter said that Hatcher knew the drop points for cocaine shipments and that he had the names and license numbers of local people involved, including major distributors.

Hatcher threatened to release his information to the media and federal authorities unless the sheriff released one prisoner from jail and dropped the county's case against him and another man who was out on bail.

Sheriff Stone, who did not meet the demands, said the scribbled, one-page letter was delivered by a mutual acquaintance who also relayed a death threat

Hatcher "told the informant that if something wasn't did then there was going to be a killing," Stone said.

The letter has been turned over to state and federal authorities.

Soon after he sent the letter, Hatcher heard that the sheriff was considering arresting him for extortion. Then, he told his friends, he started seeing Kevin Stone cruising past his home.

During the week leading up to the taking of the hostages, Hatcher met with friends and lawyers trying to figure out what he should do.

He had a map purporting to show where drugs were dropped off and a list of people who supposedly picked up the drugs and sold them.

"My advice to him was to take that stuff and bury it, and let's sit down and see what we had and see what's the best recourse," said Brayboy, the editor of the Carolina Indian Voice, a weekly paper for which Hatcher had done some writing.

"He was not the type to bury it and sit down," she said.

Mr. Legerton said he met with Hatcher three days before the hostage-taking, to discuss what should be done with the information.

"The press wouldn't print it without substantiation, and the law enforcement he didn't trust," he said, summarizing the conclusion they reached. "So it must have been over the weekend that he decided that the extremist action that he took was necessary."

"I know he was afraid," Brayboy said. "He said Kevin Stone was intimidating him, riding by his home. He couldn't sleep. He believed they were going to kill him. He went there prepared to die. He thought it was a cause worth dying for."

Of the two hostage-takers, Hatcher was the leader. A straight-A student at Pembroke State University, he had written for several Indian newspapers.

Hatcher and Jacobs, who were in jail and could not be interviewed, were charged with hostage-taking and possession of unregistered firearms. They could face life sentences, but they have become a symbol of pride to Native Americans across the country who have been calling organizations here with offers of support.

Their local supporters want to conduct an elaborate Indian ceremony in prison to bestow eagle feathers upon the two men in recognition of their bravery.