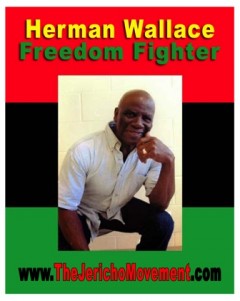 "He passed away in my home," said Ashley Wennerstrom, a long-time friend and program director at Tulane's School of Medicine. "He was surrounded by friends and family and love in his last few days."

Among his last words were, "I am free. I am free," said Wallace's counsel, who added he had "no hate in his heart...despite the cruelty (he) was shown."

Parnell Herbert, a Navy veteran who grew up with Wallace and has written a play documenting the story of the Angola Three, called Wallace "a phenomenal person" whose mission was to help people.

"He completed that mission," said Herbert. "And he was able to see himself a free man. He passed away peacefully in his sleep."

Wallace, 71, spent more than four decades in solitary confinement in Louisiana's prisons, after being convicted of the 1972 murder of prison guard Brent Miller at the Louisiana State Penitentiary, also known as Angola or "The Farm."

He maintained his innocence in the murder until his death late Thursday. Physical evidence in the case was scant and Miller's widow repeatedly questioned the court's findings, especially after Wallace said an inmate witness who testified against him was offered concessions by prison staff to do so.

Wallace and fellow Angola Three member Albert Woodfox said they were only implicated because of their involvement with Angola's Black Panther chapter. While at Angola, Wallace and Woodfox started the chapter to fight against the culture of violence and rape pervasive there at the time.

Herbert said Wallace also helped other inmates learn how to read and write, get their GEDs and prepare legal briefs.

On Tuesday, a federal court judge in Baton Rouge overturned Wallace's grand jury indictment in Miller's death, saying he did not receive a fair hearing because the jury had no female members. Wallace was released from Elayn Hunt Correctional Center that evening, where he was being held in the hospital wing, and was transported to LSU Interim Hospital in New Orleans.

Thursday afternoon, less than 24 hours after Wallace had been transported into hospice care at Wennerstrom's home, a newly-convened grand jury in West Feliciana re-indicted Wallace on the murder charge.

D'Aquilla said no court date would have been set until December, long after friends and family expected Wallace to live. But D'Aquilla denied the move was political, saying only "we just had concerns about compassion issues."

D'Aquilla maintained his stance that Wallace was guilty of Miller's murder, however, saying the federal judge only overturned the grand jury indictment and not his 1974 conviction.

Robert King, the third member of the Angola Three and who was convicted of killing a fellow inmate, was exonerated and released from prison in 2001 after 29 years in solitary.

Woodfox remains incarcerated at David Wade Correctional Center in Homer and is appealing to the 5th Circuit Court for his release. He is also seeking a restraining order against the state for daily strip and cavity searches by guards at the facility.

"Nothing can undo the authorities’ shocking treatment of (Wallace), which led more than 200,000 people to act on his behalf," Hawkins said, referring to an Amnesty petition calling for his release. "The state of Louisiana must now prevent further inhuman treatment by removing Wallace’s co-defendant Albert Woodfox from solitary confinement."

Wennerstrom said she hopes Wallace's case will call attention to the wider problems in the state's penal system.

"This was never just about Herman or just about Albert," she said. "This is about a much larger movement to make the criminal justice system actually just."