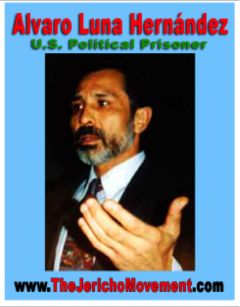 Alvaro Luna Hernandez (Xinachtli) is a political prisoner of the State of Texas and the U.S. government. He is nearly 26 years into a 50 year prison sentence for an "aggravated assault" conviction stemming from a July 1996 incident in which he disarmed a Brewster County Sheriff attempting to shoot him. Alvaro vehemently denies the charge that he assaulted the Sheriff. To Mexican-Americans in the cities, slums, plains, deserts, and prison cages of the Southwest, he is a civil rights hero, a Chicano freedom fighter true to his barrio roots and eternally fearless in the face of injustice. For years, he has been internationally recognized by amnesty movements and human rights lawyers and experts as a U.S. political prisoner, yet inside the United States, the name Alvaro Luna Hernandez remains largely elusive on the lips of progressives and social justice advocates.

Xinachtli (Nahuatl, meaning “seed”) is an anarchist communist community organizer and Chicano movement revolutionary, currently imprisoned in Texas. Formerly known as Alvaro Luna Hernandez, he worked diligently in the barrio on civil and human rights issues, known widely for his legal skills. Gaining international recognition as the national coordinator of the Ricardo Aldape Guerra Defense Committee, Xinachtli was instrumental in helping to free Mexican national Aldape Guerra from Texas’ death row, where he had been framed for the murder of a police officer.

In July 1996 Xinachtli was arrested after disarming a County Sheriff who was attempting to shoot him. After defending himself at trial, Xinachtli was sentenced to 50 years in prison for aggravated assault, a charge he vehemently denies. While imprisoned, Xinachtli continues to write frequently, has helped to organize multiple prison strikes, and has been held in solitary confinement for the last 19 years and counting. Xinachtli is a prolific jailhouse lawyer, as referenced by Mumia Abu Jamal in his book Jailhouse Lawyers: Prisoners Defending Prisoners v the USA. Xinachtli assists many prisoners in seeking new trials, and filing suits against the repressive, inhumane Texas prison system.

Texas prisons have been one of the nation’s COVID-19 virus’ ‘hotspots,’ and the courts are refusing to intervene, while prisoner dead bodies pile up in local morgues. Xinachtli is an elderly person, with his life in danger. Xinachtli was recently denied parole in September 2021 following his first parole hearing, and was given a 3-year hit.