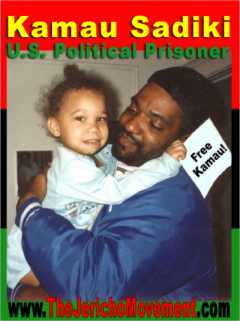 The government and police, knowing that he suffers from Hepatitis C, Cirrhosis of the Liver and Sarcoidosis, told Kamau that unless he helped them capture Assata Shakur that he would "die in prison." The police told Kamau that if he worked with them and "got Assata to leave Cuba" and go to some other country where they could apprehend her, they would not prosecute on the false police killing charge. Kamau's two daughters and grandchildren are devastated by the absence of their loving, hard-working father (he supported them by working for the telephone company in New York for over eighteen years), and are active in efforts to release him.