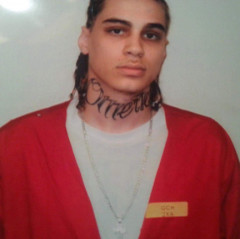 I, Kwame “Beans” Shakur am a prisoner, Chairman and Co-Founder of the New Afrikan Liberation Collective (NALC), and National Director of the Prison Lives Matter Movement. I am being held captive at the Wabash Valley Slave Camp in Indiana. I am serving a 110-year sentence for a crime I did not commit and have become politicized on the inside. My work is why I have been held in solitary confinement for 23-24 hours a day for the past six years. I have also pursued a music career in spite of my imprisonment. I fight daily for the self-determination of New Afrikan people and all those oppressed.

During the ‘60s and ‘70s my grandfather, Robert Joyner Sr., was one of the leading revolutionary activists in my city of Terre Haute, Indiana. As vice chairman of his formation, he and his comrades founded the Hyte Center in 1970 (now known as the Booker T. Washington Community Center) to serve as a community liberation center and survival program.

From a very young age, I was taught by my father who my grandfather was and what he did for our people. He made sure I knew the history of our local and national leaders.

I was captured in 2011 when over three dozen SWAT team, U.S. Marshalls, and Indiana State Police surrounded my father’s house with snipers and a battering ram tank. My father was put in handcuffs after confronting the pigs demanding they put their guns down before I would come out.

After a brief standoff, I came out, the house was raided in an illegal search and seizure with no warrant; the only things seized were all the weapons that had belonged to my grandfather. After being questioned about a double homicide of two Euro-Americans, I was illegally held captive for 33 days before being charged with the murders.

The case was never alleged to be gang related, yet the entire case was politicized surrounding my membership in Growth and Development. Every witness statements and depositions became about my affiliation.

It wasn’t until 2014 when Comrade Shaka Shakur was sent back to Pendleton Correctional Facility that I was transformed into a New Afrikan revolutionary nationalist. The comrade saw the work I was doing and gave me a copy of Comrade Sanyika Shakur’s book, Stand Up, Struggle Forward. The book changed my life, it changed the way I viewed the world, it made the very existence of being an oppressed Afrikan within this settler state and the struggles we face as a people come into sharp focus. Destroying the plurality of “race,” it introduced me to dialectical materialism and the antagonistic class contradictions hidden by the capitalist social construct of “race” to strip peoples of their nationality, turning them into subjugated neo-colonials.

I was familiar with the Nation of Islam, the Five Percenters/Nation of Gods and Earths, and the Moorish Science Temple of America, but none of them focused on dialectical and historical materialism for a concrete scientific analysis of how to achieve self-determination and national liberation like the Republic of New Afrika. This led to Shaka Shakur and I founding the New Afrikan Liberation Collective (NALC).

I began speaking and writing about using NALC to create a front to rebuild the NAIM by unifying the leading cadre individuals and organizations within the New Afrikan Nation. This is when Shaka introduced me to the brilliant works of Comrade Jalil Muntaqim, explaining that what I was calling for had already been proposed by Jalil through FROLINAN (Front for the Liberation of the New Afrikan Nation).

After getting my hands on the National Strategy for FROLINAN and the FROLINAN Handbook, I couldn’t believe that this calling hadn’t been formulated into our program for decolonization. For a year and a half, I have been planting seeds to grow FROLINAN, networking with comrades all over the kkkountry, both inside and out of the kkkamps to bring individuals and formations into the front.

It is clear that we need to evolve a unified strategy for direction moving forward if we are serious about re-building to win.

My main objective with the prison movement right now is to get outside supporters to view the prison-industrial slave complex through a broader lens in order to see its role in colonizing the New Afrikan Nation. At the same time, when we are trying to raise consciousness about the U.S. violating international laws on the treatment of Prisoners of War who were members of a colonized nation fighting for independence, there needs to be an active national liberation struggle from our people in order to gain momentum and international support.

The liberation of these freedom fighters, the future of our nation, and any hope of freeing the land rests upon what we do right now!

The struggle is still for land and independence! Re-Build to Win!