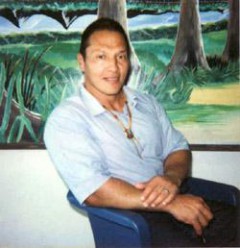 Luis V. Rodriguez was raised in an atmosphere of political and social involvement. As a youngster, he lived in Los Angeles for a period of time with a group known as the Brown Berets, a Chicano-Native American militant organization, which formed against racism and other social injustices.

Luis grew up in the times of the Vietnam war and it`s consequent demonstrations which resulted in the Watts Rebellion, and the 1970 Whittier Boulevard Rebellion after the police killed political activist and journalist, Ruben Salazar, and at which rebellion Rodriguez was a part of.

Luis« politically active father and his contact with the Brown Berets helped Luis to place these events into proper perspective and to bring about his political and social awareness. He also interacted with the League of United Latin Americans (LULAC), the G.I. Forum, and other sociopolitical organizations.

Rodriguez worked diligently to help himself and others. At age seventeen, he started Atzlan, a Chicano-Native American news magazine, which focused on politics, history, culture, and ethnic awareness. He was editor-in-chief, artist, and headed a small staff of other youths. He was a counselor at an Offender Ex-Offender program in Sacramento, a counselor in Los Angeles at the AYUDATE program, and a counselors` aide at the California Youth Authority Perkins Reception Center. his goal was to become a California Youth Authority counselor, a parole or probation officer, or an attorney, in order to help young people. Until the erroneous conviction in 1981 for the two homicides, he had never been convicted of a felony (People V. Rodriguez, 1991).