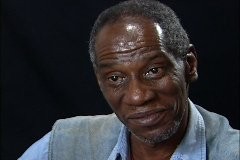 Michael "Cetewayo" Tabor was born in Harlem on December 13, 1946, to Grace Hunter and Michael Tabor, Sr.He attended the St. Aloysius Roman Catholic School on West 132nd Street and Harlem's Rice High School where he excelled in both academics and varsity athletics.

Tabor joined the Black Panther Party in 1969 and took the name Cetewayo, a 19th century Zulu Warrior King. It was during that time that he wrote an insightful pamphlet on drug addiction called “Capitalism Plus Dope Equals Genocide.” According to former members, Tabor was one of the more well known of the spokespersons for the Panther Party and was admired for his deep baritone voice and charismatic personality.

He was among a group of 21 members of the New York Chapter of the Panthers that was indicted in April of 1969 for conspiracy to commit coordinated attacks on New York City Police precincts and department stores. In February of 1971, while out on bail, Tabor flew to Algiers, Algeria in fear of his life due to the illegal FBI COINTELPRO induced internal conflicts that were developing within the Black Panther Party. Several months later all 21 defendants were acquitted of all charges.

Tabor arrived in Algiers with his new wife, fellow Black Panther Party member Connie Mathews, who had been the group’s International Coordinator. They became part of the International Section of the Black Party led by Eldridge Cleaver. For a time, the Panthers were guests of the Algerian Government, but were eventually expelled from the country.

In 1972 Tabor moved to Lusaka, Zambia, on a writing assignment for the Paris-based Africa-Asia magazine in order to cover the African liberation movements based there. He would remain in Lusaka for the next 38 years. After the death of his wife, Connie Mathews, he married Zambian national, Priscilla Matanda. Tabor became a popular and respected figure in Lusaka and continued writing on politics and culture for various publications. His distinctive voice allowed him to transition into radio and for many years he hosted programs that featured jazz, African and world music on several Lusaka radio stations.