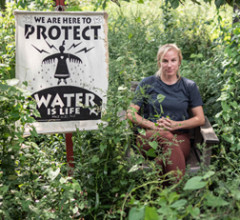 Jessica Reznicek is a 40 year old land and water defender who has worked with and lived in the Des Moines Catholic Worker community for the last 10 years. In 2016, Jessica took a stand against the construction of the Dakota Access Pipeline.  Jessica and her fellow organizers attended public comment hearings, gathered signatures for valid requests for Environmental Impact Statements, and participated in civil disobedience, hunger strikes, marches and rallies, boycotts and encampments.

In 2017, Jessica and another person took direct action and disabled construction machinery in order to protect the land. No one was injured by their actions, and the land was protected from the flow of oil for an additional six months.

Jessica has worked with the Catholic Worker and the homeless populations of Duluth and Des Moines. She has worked on third-party accompaniment work in Palestine, and as an organizer during Occupy Wall Street, both at Zuccotti Park and in Des Moines. She has campaigned against weapons contractor Northrup Grumman in Omaha and protested the drone base in Des Moines. She also protested the construction of a U.S. Naval base on Jeju island, South Korea so as to save the sacred Gureombi Rock in the village of Gangjeon.

On February 6, 2021, Jessica pleaded guilty to one count of conspiracy to damage an energy facility and on June 30, 2021, was sentenced to 8 years in prison. She received the ‘federal crime of terrorism’ enhancement and was ordered to pay over 3 million dollars in restitution and three years of supervised release. She reported to federal prison on August 11, 2021. Jessica has a deep love for nature, camping, swimming, hiking, theology, music, gardening, laughter and eco-sustainability, as well as a commitment to self-discovery through deep relationships cultivated in intentional faith-based community living.