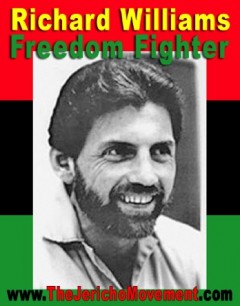 Richard Williams, one of three remaining Ohio 7 prisoners, died at the Federal Medical Center in Butner, North Carolina, on 7 December 2005, one month after his 58th birthday. The cause was complications resulting from cancer and Hepatitis C. Prison and government authorities hounded Williams—who maintained to the end his anti-imperialist, anti-racist beliefs—to his grave. When he could barely walk, he was still shackled and chained any time he left the Butner facility. Interferon treatments were delayed until it was far too late.

This is bitter news. Williams had been held at U.S. Penitentiary Lompoc, California, and was remanded to solitary after the September 2001 terror attacks. As his son, Netdahe Williams Stoddard, wrote in a recent letter: “Richard was a strong and healthy man up to that autumn of 2001. Fifteen months of solitary confinement, lack of exercise, medical neglect and abuse by a reactionary and vengeful federal government left dad suffering from an array of medical problems.” Even after he suffered a mild heart attack in February 2002, during a short stay back in the general prison population, Lompoc authorities sent him back to solitary.

Richard Williams came of age politically in prison. A working-class kid from Beverly, Massachusetts, in 1967 he chose prison over joining the Army when convicted of marijuana possession. In prison again in the early ’70s, he organized protests and strikes for better conditions. After his release, he joined other activists in protecting the homes of people in the Boston area who were targeted by anti-busing racists. In 1979, he and his comrades went to Greensboro, North Carolina, to protest the Klan’s murder of five unionists, civil rights workers and supporters of the Communist Workers Party. In 1981, he joined what he called “the armed clandestine movement.”

Williams was convicted in 1986 of five bombings of military recruitment and corporate facilities and sentenced to 45 years. But an effective life sentence wasn’t enough for a government that wanted to bury such radicals in prison. The next year he went on trial for the 1981 killing of a New Jersey state trooper. Fellow Ohio 7 defendant Tom Manning testified that he had shot the officer in self-defense and that Williams was not even present. The result was a hung jury.

In 1989 Williams was tried on charges of conspiring with fellow Ohio 7 defendants Ray Luc Levasseur (released from prison in November 2004) and Patricia Gros Levasseur to overthrow the government of the United States. The charges of “seditious conspiracy” were based on a 1948 law designed to criminalize left-wing political and labor activity (see “RICO Witchhunt Targets Ohio 7,” WV No. 476, 28 April 1989). But despite spending millions on a trial that dragged on for months against an isolated handful of leftists, the government’s attempt to revive “thought crime” sedition prosecutions was rejected when the jury refused to convict.

The government wasn’t finished, however. In 1991 he was retried and convicted of the New Jersey killing in a courtroom packed with state troopers and their supporters. Criminally, Williams and the rest of the Ohio 7 were abandoned by the bulk of the left, including many of those who had vicariously cheered their earlier actions. As Ray Levasseur wrote in 1992: “The real deal with those that renounce us and retreat from trials and prison battlegrounds is that we are seen as anti-imperialists with guns.... The dichotomy was striking: a frenzied police power bent on exacting their pound of flesh, and the wilted response of the Left.”

The actions of the Ohio 7 are not crimes from the standpoint of the working class. However, as Marxists, we do not share the political views that animated Richard Williams, Jaan Laaman, Tom Manning and the rest of the Ohio 7. Despairing of organizing the proletariat in struggle, they decided that the road to fighting this racist, exploitative system was “clandestine armed resistance” by a handful of dedicated leftists. Despite these political differences, the Spartacist League and Partisan Defense Committee have forthrightly defended these militants, adding Williams, Laaman, Manning and Levasseur to the PDC’s prisoner stipend program, and have always respected their commitment and integrity.

At the PDC’s Holiday Appeal benefit in New York City, two days after Richard Williams’ death, leftist attorney Lynne Stewart spoke movingly of her years-long association with Williams. Stewart, who faces sentencing on trumped-up charges of “aiding terrorism” for her defense of Sheik Omar Abdel Rahman, noted that Williams and his comrades “truly believed in what they were doing. And they truly believed that victory was around the corner.”

Richard Williams stood up to some of the worst that the rulers’ courts and prison system could inflict and never wavered. He never repudiated his road taken, and more than 20 years in prison hellholes could not break him. Honor Richard Williams! Free Jaan Laaman and Tom Manning!

Richard Williams’ family requests that any donations in his memory be made to: the Rosenberg Fund for Children, the Lynne Stewart Defense Committee, the Jericho Movement, or other organizations that support political prisoners or fight against the prison system.