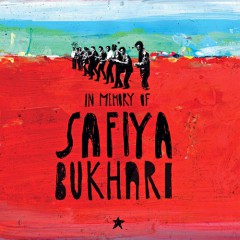 In the spring of 1999, I was trying to get some more info on the situation of PPs and POWs coming from Black fighting organizations for my final dissertation. I found a black web page with a red slogan: Dare to Struggle, Dare to Win.

Writing to the website, I would never have imagined the meaning and importance that the very person who replied would have on me as an individual and a militant. She replied to me inviting me to write and eventually to visit prisoners.

She was Safiya who, as an internationalist, wanted to connect to other countries' fights and militants, especially with the younger ones with whom she could share her experience and knowledge.

After my final dissertation (March 1999), I decided to follow Safiya's advice and I went to NYC. I found a shack & an under the table job; having provided the basics I was ready to understand the dynamics of the Black Liberation Movement and to visit prisoners and meet comrades in order to build.

Little did I know back then, but my first days over there weren't easy … someone coming from nowhere trying to get info on the Movement … How could this have been simple? Distrust and paranoia were the main achievements of Cointelpro, but this was not the case, probably she was checking me out and later I understood how she could be such a loving woman but at the same time, when needed, strict and totally committed.

She could subdue the hardest revolutionary with the blink of her eyes … When I finally met her at Laura Whitehorn's release party, she probably recognized in me the very same fire she had seen in most of her comrades and she immediately recognized it as revolutionary love. She introduced me to most of the peeps, giving them a surprising number of details on me and my studies on the terrorist operations conducted by the US government to crush internal opposition in the late 60s/early 70s. This blasted me and that was the beginning …

A few month later, Robert – a great friend and comrade, we met while working to support PPs – and I invited Safiya for a number of lectures in Italy . Her tour was impressive, her lectures always packed with peeps, with undercover police trying to scare and disrupt the tour, with our former PPs trying to connect. 13 lectures in 15 days. From Switzerland to the very south of Italy , always sharp, committed, but always smiling.

We later discovered her health wasn't so good, but this never prevented her from representing the cause of the liberation of all Political Prisoners and Prisoners of War. In those days, Jericho Italy was established. I still remember her closing words in Milan: Remember: the guns won't bring you to politics, politics will bring you to the guns!

December 2001: Jericho Italy is in NYC … actually we didn't even had the time to crash at Safiya's crib after an 8 hour flight. She was reserving 2 seats for us on a prison gap bus. We started staring in each other's eyes while Safiya was on the phone and we understood we were already on …

Before midnight we're already in Columbus Circle trying to get the bus to Auburn in order to visit Jalil. It was a 3 week stay in NYC and we had the chance to visit 4 prisoners: Jalil, Seth and David Gilbert (together, we're sitting next to each other) and Ojore Lutalo. You think that was it? Hell No!

During the 3 weeks we stayed in Jamaica, Queens, with her we've been involved in a number of meeting to prepare a Demo in Mumia's and all Political Prisoners' support, we made Jericho Tshirts, we demonstrated, we helped with the merchandise and most of all we were involved in a number of political discussions. Having said all this, I can assure all the people there that while engaged in all this we enjoyed a great Chinese dinner with her, lots of laughs and what I still remember as my warmest memory is fixed on a night while driving with her from Manhattan through BK to go back to her place … during all the way we're singing soul music with all the breath we had in our lungs, enjoying memories of her teen years …

In august 2003, I arrived in NYC late at night with my mind on calling Safiya to re-connect and meet again. We had exchanged just a few emails since the summer before when we had the chance to stay together for a couple of weeks (I still remember a wonderful dinner with Sally, Paulette, Sonia – my partner – and her).

The morning after, I phoned her first thing in the morning, but surprisingly her nephew answered the phone, giving me the most shocking news I could ever expect: she had passed away that very night. I was totally upset, I knew she had health problems but she never broke it down for us … when talking to us she always had her mind on organizing the youth and supporting the brave comrades still imprisoned behind enemy lines.

I really couldn't believe it. Safiya had told me her mother had recently passed so I thought it was the fault of my poor understanding of the language. Her nephew – don't know his name but I'd love to thank him – was really kind and he tried to explain to me what had happened once more …

The irony behind all this is that I wish I could have seen her once more, telling her a number of things I never really expressed, cause as comrades our relationship, though already a friendship, was mainly focused on the work for the people. So I had the chance to come to BK for her funeral and to see and hear her friends and comrades talk about her, to understand how she impacted the lives of so many people because of her humanity and of her determination … the love of the family and the respect of the comrades …

I wanted to express these things from the very first moment but I wasn't feeling entitled to it … in that place in that particular moment but now I'd love to pay her homage and to express all my love for her and for all our brave brothers and sisters who have donated their lives in the struggle (NUH is in our mind and hearts). Another great comrade has gone but her legacy is still alive

so let's PICK UP THE WORK! Does this remind y'all of anything?

the words you know, you put them in a row. today as usual. like the thoughts that we remember. carrying our minds on the past. on the present days. past and present watching ahead, ahead. never still. never died for real. half way between the revolution and the dream of revolution. trying. falling. trying again. daring to dare. counting time that separates inside from outside. outside from inside. trains, buses, travels. warm, cold. kilometres and distances. glasses. handcuffed hands and feet. isolation and torture. resistance. commitment. we claim their/our identity. we were born while fists were raised to the sky. armed hands in the streets assaulting freedom and the sky without a pause. without breathing. endless struggle until the very end. today. today we check what's left. trying. falling. trying again. daring to dare. we know the words. we know their names. safiya has taught them to us. we free their names. we invent new words.

now and always our revolutionary love and respect to safiya bukhari.